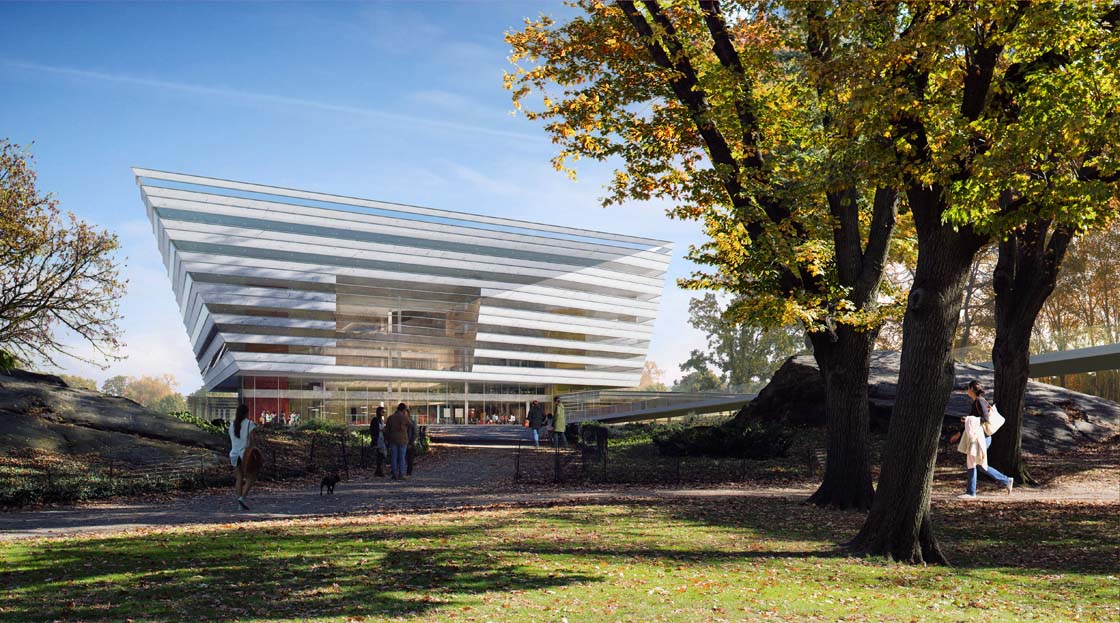 Shanghai, China – Schmidt Hammer Lassen has won a two stage international competition to design the new city library for Shanghai, China. Shanghai is currently the most populous city in the world with nearly 25 million inhabitants, and has a central library system that dates back to 1847. The practice saw off competition from Kengo Kuma, David Chipperfield and Dominque Perrault to the prestigious commission after a 6 month two stage process. The 110,000 square metres library, located in Pudong District – the area of the city known for its iconic skyline, will sit immediately next to Century Park – the largest park in the city spread over 140 hectares.

The project is conceived as a singular monolithic object floating above the tree canopy within the park. The main library volume floats above two pavilions that will house a 1200 seat performance venue, exhibition and events space and a dedicated children's library, that will all open up towards a series of landscaped courtyards and gardens.

“We see the library as the focal point in a park. A central rock within a city scale Chinese garden,” said Chris Hardie, Partner at Schmidt Hammer Lassen. “One of the most compelling things about this project is its location within a parkland setting. You are in the heart of the world's largest city, yet we have the opportunity to create a sanctuary for knowledge and media in the trees,” added Chris.

The project completes a trilogy of cultural projects alongside the Science & Technology Museum and the Shanghai Oriental Arts Centre –- all which surround the centre of the Pudong Government – and sit alongside Century Avenue that links Century Park to the Business District that forms the now globally recognisable skyline of Shanghai.

The library itself is organised around a grand central atrium in the form of three staggered reading rooms that open up and connect to various parts of the library and various contextual parts of the city from Century Park to the east, a new library park to the south and the city to the north and west.

The library volume is carved and twisted to reflect the surrounding park and sky, and continuously clad in a facade of clear, insulated and fritted glass. The glass panels are arranged in horizontal bands that are angled to minimise solar glare in addition to horizontal louvres - allowing unobstructed panoramic views to the park and city beyond.