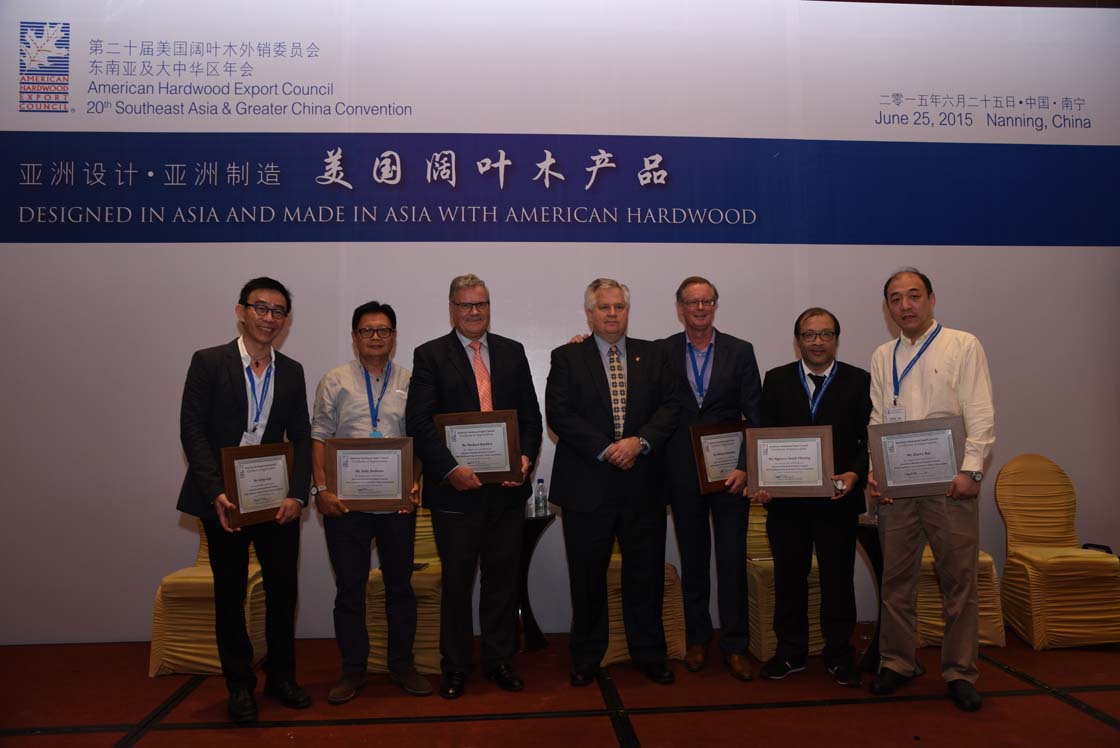 John Chan, Regional Director of AHEC welcomed the media from all over China and Southeast Asia, saying that in 2014 China had become the largest furniture exporter in the world and was the largest export market for American hardwoods. He predicted a bright future. Jennifer Brand pointed out that China had grown from importing 40 containers a year from the U.S. to 160 per day. Mike snow said that half all graded lumber is now exported, of which half goes to China, with urbanisation the main demand driver. Mark Barford confirmed the NHLA mission, activity and commitment to China as part of its ‘Global Reach’ and Di Nguyen discussed the structural advantages of American softwoods.

Speaking at the meeting of members and media during AHEC’s 20th SE Asia and Greater China Convention, Executive Director Mike Snow said: “Our strategy is now to focus on China’s inland cities. The huge coastal cities, such as Shanghai, Guangzhou and Tianjin near Beijing are mature markets well supplied and familiar with American hardwoods. But there are dozens of newer, inland markets that AHEC needs to develop, such as Nanning.”

The Convention theme ‘Designed in Asia and made in Asia with American hardwood’ extended a campaign that AHEC launched in Singapore earlier in the year to recognise and inspire Asian talent in design and manufacturing. Nanning kicked off with ‘Asia Market Panel Discussion’ moderated by Michael Buckley, Turnstone Singapore, with an introduction by Mike Snow with their joint presentation of market data and trends in Southeast Asia and China. The panel comprised Ernie Koh, President of SFIC, Singapore (manufacturer), Harry Bai, AM Forest Products, China (Distributor), Michael Hermens, APP Timber, Malaysia (importer & distributor) Eddy Budiono, PT Abadi Indorono, Indonesia (veneer trader), Nguyen Chanh Phuong, HAWA, Vietnam (contractor). Michael Buckley quoted the old Chinese saying “we live in interesting times” and cited the currency crisis in Europe, economic and political tensions that affect all, but that one thing is sure – China needs wood.

The two hour session then drew many questions from the AHEC membership about species, promotion initiatives, the importance of the ASEAN population of 630 million in Southeast Asia, branding and hang tags, the check-off programme and, last but not least, the current inventory surplus of U.S. hardwood lumber in China. Michael Hermens felt that the market in China is changing and urged closer relationships with manufacturers. Ernie Koh was convinced of the ongoing demand for high value (imported) wood products by Chinese consumers and John Chan was not so pessimistic as some, given the furniture exports from China running at $55 billion in 2014. There was much talk of the important role of designers and trend setting in driving demand; and a final call for AHEC to develop more projects in Asia, as it has done in Europe.

Mike Snow gave a very comprehensive presentation on ‘American Hardwoods around the World’, their benefits and the importance of China to the U.S. hardwood industry. “There are lots of cites in China still growing,” he said. David Venables, AHEC European Director, presented a stunning array of projects executed by AHEC in recent years including the Red Oak ‘Wave’, the ‘Wish List’ and ‘Out of the Woods’ in several species and the ‘Endless Stair’ in CLT Tulipwood, which may lead to new markets for CLT in American hardwoods. All of this work by AHEC gives a better understanding of the material which has relevance in more than just one region he suggested. Mark Barford, CEO and Dana Spessert, Chief Inspector of NHLA presented the mission of NHLA and explained the NHLA Grading Rules. They extended a welcome to NHLA’s annual convention to be held this year in Nashville TN in October. Barford was leading a group of NHLA members touring China, which included participation at the Nanning Convention, where he stressed the ever stronger relationship and cooperation between AHEC and NHLA.

After lunch Nguyen Chanh Phuong showed his latest prestigious project in American Ash joinery – the ‘Gem Convention Centre’ in Saigon, where recently AHEC had held a seminar as one of the Centre’s inaugural events. Eddy Budiono concluded the programme with a presentation on veneer from an Indonesian perspective.

About 400 delegates attended the two-day Convention in June, which included 300 Chinese and about 40 AHEC member companies; most of which had small booths at a mini trade show to promote their products during the networking reception that ended the event.