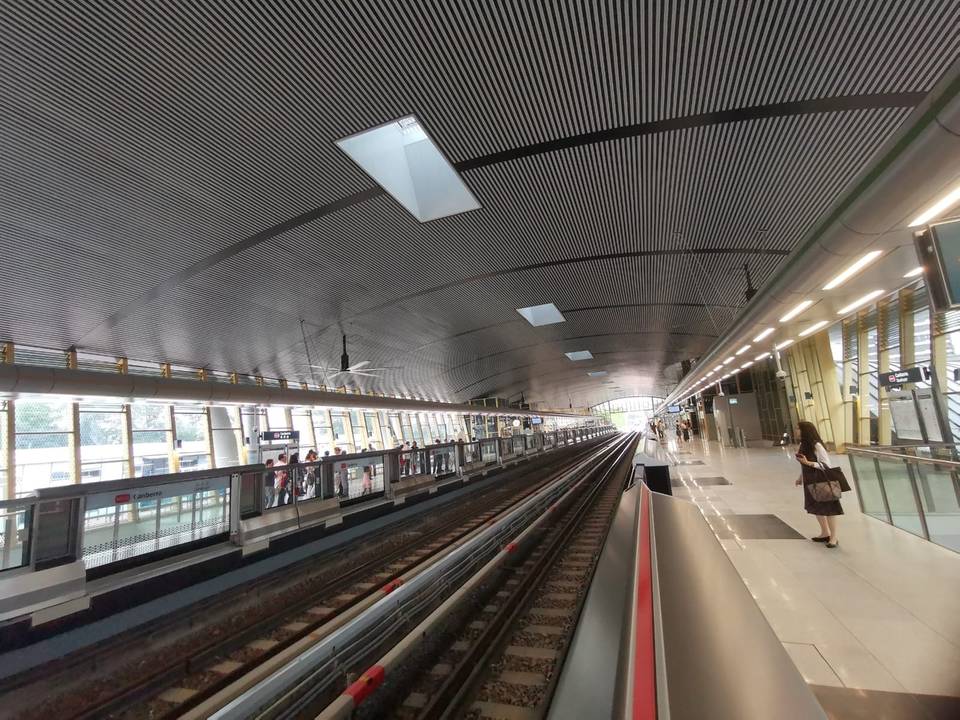 The Building and Construction Authority (BCA) has introduced a new Green Mark scheme for transit stations, which was developed in consultation with Land Transport Authority (LTA) and industry practitioners involved in station developments, to ensure that their design, construction and operation can be enhanced in an environmentally sustainable way. The scheme was piloted in four MRT stations over the past one year. Canberra Station is the first to be accorded the Green Mark Platinum award under the new scheme.

With increasing demands from urban development, the rail network in Singapore will be expanded over the next few decades. It is important for transit stations to be designed with environmental sustainability in mind to cut down on their carbon footprint. Adapted from the BCA Green Mark scheme established in 2005, the new Green Mark for Transit Stations scheme was tailored to the specific needs and operational requirement of transit stations in Singapore. Besides setting a high standard for energy performance, the scheme also considers criteria such as integration with its surroundings with the seamless connectivity and accessibility to all public transports nodes such as bus stops and taxi stands. The scheme also places high emphasis on ventilation performance of the station design, which enhances the thermal comfort of users. At least 50 stations are estimated to be in the pipeline to meet the Green Mark Platinum standard, and from these developments, there is an estimated reduction in energy consumption of about 33 GWh per annum, which translates to the energy used to power up 7,500 4-room HDB flats per year.

BCA Chief Executive Officer Mr Hugh Lim said, “BCA has been constantly reviewing and improving the Green Mark scheme to ensure that it remains relevant to the evolving needs of the people and the built environment. With the increasing demand for transit facilities, this new addition to the suite of Green Mark schemes will provide a holistic framework to enhance the sustainability of transit stations. We are glad to have LTA’s support in the development of this new scheme as we continue to push for higher environmental sustainability standards, as part of Singapore’s efforts to mitigate the environmental impact of urbanisation.”

Canberra station, the first to be accorded the BCA Green Mark Platinum award under the new scheme, was constructed with an extensive use of environmentally-friendly materials and products. The station incorporates biophilic design to help liven and enhance commuters’ experience with edge planting, green roof and vertical greenery along with daylighting provision within the platform, helping to provide thermal comfort as well as visual relief. During the design stage, the design team also conducted an in-depth study to ensure the effectiveness of weather protection measures against wind-driven rain for commuters’ comfort. This ensures that the station remains well-ventilated at all times, even while minimising infiltration of rain during heavy showers. The station is also equipped with automatic dual speed escalators, energy efficient lift system, LED lighting, water-efficient fittings and an irrigation system with rain sensor.

Said Land Transport Authority Chief Executive Ngien Hoon Ping, “As part of our long-term vision to provide a transport network that is convenient and well-connected, we will be adding new stations to our existing network over the next few years. In tandem with our goal of improving rail connectivity, we are equally committed to implementing practices that promote environmental sustainability throughout the planning, design and construction of our stations. The Green Mark Platinum certification for Canberra station shows our efforts are on the right track and encourages us to strengthen our efforts.”