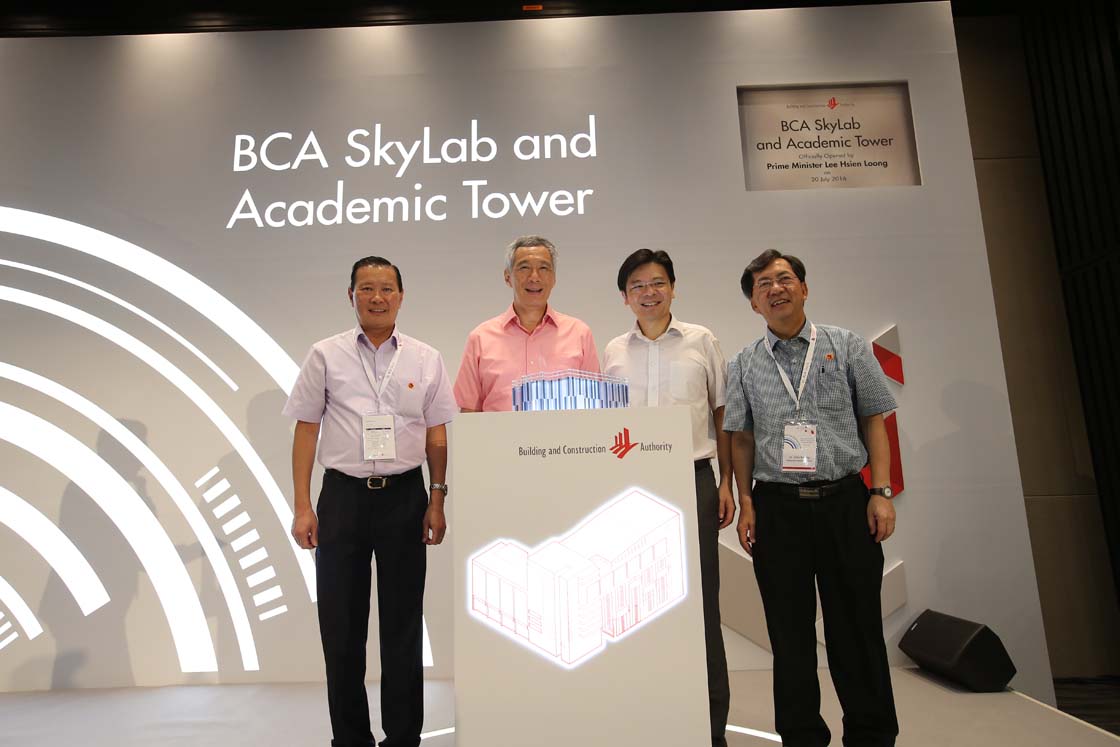 Singapore – Prime Minister Lee Hsien Loong officially opened the BCA SkyLab – claimed to be the world’s first high-rise rotatable laboratory for the tropics – and the Academic Tower – the dedicated experiential learning facility and living lab for the built environment sector – at the BCA Academy in Singapore.

The BCA SkyLab is developed by BCA in collaboration with the Lawrence Berkeley National Laboratory in California, a world leader in science and engineering and building energy performance research. The facility boasts a 360-degree rotatable capability, full plug-and-play configurability and is fitted with extensive instrumentation and sensor networks scalable in future. The 132 square metres facility is equipped with a network of more than 200 sensors with high accuracy and granularity, across two identical cells for comparison testing. These sensors measure performance metrics such as energy performance, indoor environmental quality, outdoor environmental parameters and building automation system indicators.

A series of potential experiments, involving more than 20 organisations, has been lined up till end-2018 – such as integrated systems test of lighting, cooling and sun-shading; air-conditioning systems with oblique fins; predictive methods for tropical daylighting; and cool surface technologies. Researchers from local universities such as Nanyang Technological University, National University of Singapore and Singapore University of Technology and Design will be among the first principal investigators for these projects, together with the industry.

Dr John Keung, CEO of BCA said: “Our medium term aspiration is to have ‘Positive-energy Low-rise, Zero-energy Medium-rise, Super Low-energy High-rise buildings in the tropics’. To realise this, we need to achieve breakthroughs with innovation as part of our green building agenda going forward. The BCA SkyLab is one such initiative – it is one of the most innovative projects we have undertaken and one of our proudest accomplishments. The BCA SkyLab aims to significantly improve energy efficiency beyond the current best-in-class Green Mark Platinum buildings which are already at least 30 percent more energy efficient than a code-compliant building. Together with our other green building research and innovation initiatives, the BCA SkyLab shall be a key facility for the built environment sector to make significant contribution to the global sustainability agenda.”

The BCA SkyLab is built on the rooftop of the newly built Academic Tower at the BCA Academy. The Academic Tower transforms the BCA Academy into a living lab that enhances the learning experience of students and built environment professionals alike. Some of the experiential features include a rooftop education deck with a functional energy efficient chiller plant, life-size graphics on Universal Design and a dedicated outdoor air dual wheel system. The Academic Tower complements the mix of existing experiential and test-bed facilities at the Academy, such as the Centre for Lean & Virtual Construction, Zero Energy Building and Sensory Garden.